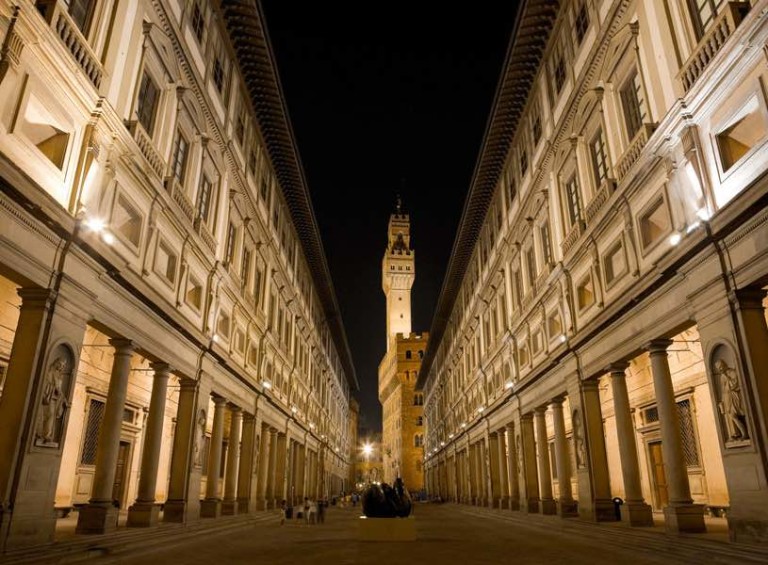 History of the Uffizi Gallery in Florence

The history of the Uffizi Gallery in Florence is a fascinating one.

Few people know the huge building of the Uffizi was not created as a museum. It was ordered in 1560 by Cosimo I de’ Medici, known as Cosimo the Great and first Grand Duke of Tuscany, to house the administrative and judiciary offices of Florence, the “uffizi” (which means “offices” in Italian).

At the time when the grandiose building was being built, the Medici hegemony was secure over Florence.

Cosimo called upon his favorite artist, Giorgio Vasari, to design the U-shaped building we can still admire today. The great architect also built the secret passageway that joins the Uffizi to the Pitti Palace running above the Ponte Vecchio, by the church of Santa Felicita (peeking into a balcony inside from which the family could attend mass without having to walk through the streets) and the many buildings and towers on the way to the palace before ending at the Boboli Gardens. The “Corridoio Vasariano” was built to celebrate the marriage of Cosimo’s son, Francesco, to Giovanna d’Austria in 1565 and was built in just 5 months.

To build the Uffizi and make space for the huge complex, many constructions in the area were demolished. Among them was San Pier Scheraggio, an ancient and important Romanesque church. You can still see some remains of the old church’s exterior on the ground floor along the street called Via della Ninna, facing the Palazzo Vecchio. The arches and columns of one of the aisles of the church are still visible from the street.

The old nave of San Pier Scheraggio is the only part of the church that is still almost intact and is encapsulated into the Uffizi’s ground floor, at the corner closest to Palazzo Vecchio and near the museum’s entrance.

The hall of San Pier Scheraggio is often closed and opens only for special events and celebrations.

After Vasari’s death in 1574, the Uffizi was finished by two more great artists, Bernardo Buontalenti and Alfonso Parigi the elder.

Just a few years later, in 1581, Francesco I de’ Medici, Cosimo’s son and the new Grand Duke of Tuscany by then, set up a private gallery with statues and other precious objects on the top floor of the east wing of the Uffizi, all part of the private family collection of art objects.

The heart of this original private museum is the octagonal room called Tribuna or the Tribune. Completed by Bernardo Buontalenti in 1584, it represents the four elements and is fully decorated with marvelous marble, precious stones and thousands of shells inside the dome.

The collections of the Medici family would become vaster and vaster, continually enriched by every member of the Medici dynasty until the family died out in the 18th century.

The Family Pact, signed by Anna Maria Luisa de’ Medici, the last Medici, ensured that all the Medici’s art and treasures collected over nearly three centuries of political ascendancy remained in Florence. She bequeathed most of it to the Tuscan State upon her death in 1743 so that “they would remain as decoration for the state, for the utility of the public and to attract the curiosity of foreigners”, and it all had to stay in place and not leave Florence or Tuscany. In particular, she declared that the Uffizi Gallery was a “public and inalienable public good”, paving the way for it’s great wealth of art to be shared with all.

The Gallery opened to the public in 1769 by Grand Duke Peter Leopold, likely the most enlightened and important member of the Austrian House of Lorraine, the new reining family of the Grand Duchy of Tuscany which lasted until the unification of Italy in 1860.

At that time, the gallery was completely reorganized according to the new scientific criteria of the Enlightenment and the collections were divided per type. The paintings were divided from the scientific pieces, for which a new museum was built, the Museum of Zoology and Natural History best known as La Specola. During the nineteenth century many Renaissance statues were moved to the National Museum of the Bargello and some Etruscan pieces were placed to the Archaeological Museum.

Since then, the Uffizi have become one of the most visited and popular museum of the world.

The future of the Gallery is now focused on the project called the Nuovi Uffizi, or New Uffizi, which will include the modernization of all of its halls. The New Uffizi has already doubled the exhibition space for the museum, permitting a more adequate viewing of the works which have also been reorganized by artistic periods or themes.

The New Uffizi will be a museum where tradition will meet modernity.