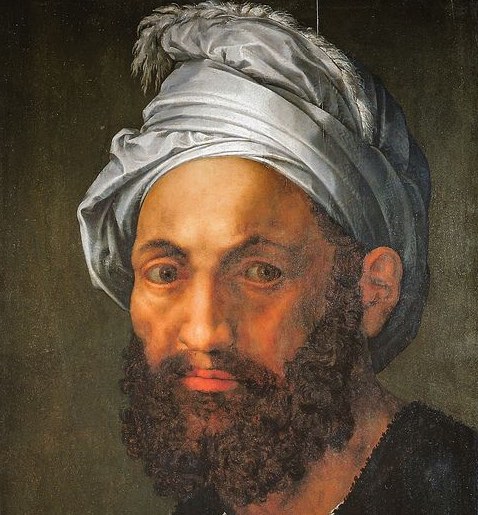 Few artists have left such a deep and enduring mark in art history like Michelangelo Buonarroti (1475-1564). Born in a small town near Arezzo called Caprese, in the beautiful Tuscan area called Casentino, Michelangelo was soon whisked off to Florence and in particular to the nearby Settignano village where, due to his mother’s poor health, he was put in a wetnurse’s care. The woman was born to a stone carving family and Michelangelo, as an adult, remembered that those humble workers paved the way for his future profession.

Our guided tour discovering Michelangelo in Florence begins in two narrow and typical streets of Florence city center, via dell’Anguillara and via de’ Bentaccordi, both in Santa Croce neighborhood. A humble building reminds us of its most famous guest. In fact, it wash here that the young artist lived when he was a teen, as the marble plaque reads:

LIVED WHEN HE WAS YOUNG

To better understand the evolution of Michelangelo Buonarroti’s style, we will head to Casa Buonarroti, situated in the vibrant and picturesque district of Santa Croce. Despite its name, Casa Buonarroti (Italian for Buonarroti’s House), the building is not the place where the artist lived. It was built by his beloved nephew, Leonardo, and it passed from one generation to another until the family died out.

It houses two pieces which the great artist sculpted in his twenties – both are in the style of a bas-relief: the Battle of the Centaurs and the Madonna della Scala. The first would not have been possible without the knowledge of the classical statuary which he absorbed while studying at the Garden of San Marco as a young teenager (the art academy sponsored by the Medici family). The second is a clear homage he payed to great sculptor and inspirator Donatello.

After the riots that forced the Medici family to go into exile in 1494, Michelangelo lost his patrons and, after having spent some time in Bologna, he moved to Rome. When we think of Michelangelo and Rome we cannot help thinking of the Sistine Chapel, the Pietà in the Vatican or Saint Peter’s dome. Here in Florence the Bargello National Sculpture Museum hosts a famous Bacchus that dates back to his early Roman period, other than some more masterpieces such as a Brutus, his famous Tondo Pitti (a round shaped Madonna and Child, “tondo” in Italian) and a David/Apollo (commissioned by Baccio Valori, an ally of the Medici, around 1530 and left unfinished).

The Accademia and the Prisoners

The best known work by Michelangelo in Florence is no doubt the David in the Accademia Gallery. He created his most famous masterpiece in 1501 soon after he had come back to Florence. This masterpiece was carved from a single block of marble which remained neglected for 25 years, after two artists had tried to do their best to make a “David” with little success. The young Michelangelo was convinced by the Florentine government to start the work again and he finally finished it in 1504.

The Accademia Museum is also house to Michelangelo’s famous “Prigioni” (Italian for Prisoners), commissioned by Pope Julius II for his own tomb. These works are unfinished (“non-finito”) sculptures and the figures appear the be stuck within the marble block, struggling to come out. To learn more about the Prisoners, the “non-finito” theory and Michelangelo’s style a guided tour of the Accademia is recommended.

In the meantime, from 1515 to 1534, two members of the Medici family became popes: Leo X and Clement VII, respectively son and grandson of Lorenzo the Magnificent. The two popes commissioned Michelangelo to build the Sagrestia Nuova in the Medici Chapels and the Laurentian Library for the Basilica of San Lorenzo. These are both excellent examples of Michelangelo’s diverse skills. Michelangelo’s work showed an innovative use of space which was considered revolutionary for its time.

Though not open to the public, this church is home to the Michelangelo’s “secret room”, where he lived like a refugee for three months during the siege of Florence of 1529-1530 that turned the Medici into Dukes of Tuscany. Due to his democratic beliefs, he was fearing the revenge of his once protectors. Michelangelo covered the walls with sketches and drawings while waiting for better times.

Near the Complex of San Lorenzo and close to the Duomo is the stunning Duomo Museum hosting the dramatic Pietà Bandini that Michelangelo carved in Rome in 1550 to decorate his own tomb. What adds a special significance to this work is the self-portrait of Michelangelo in the likeness of Nicodemus, the male figure holding the lifeless body of Christ flanked by Mary and Magdalene.

We keep walking and now head to the Palazzo Vecchio, hosting the Genius of Victory, another statue originally conceived for one of the many versions for Pope Julius II’s tomb in Rome and displayed in the marvellous Salone dei Cinquecento.

This statue was placed into the Palazzo Vecchio after the death of Michelangelo, when his friend Giorgio Vasari pressured the artist’s nephew to give it as a gift for Duke Cosimo I de’ Medici who used it to symbolize Florence conquering Siena.

During his early XVIth century stay in Florence, other than the David, Michelangelo also accomplished another masterpiece: the Tondo Doni, a mysterious and fascinating painting displayed in the Uffizi Art Gallery. It’s the only painting by Michelangelo in Florence.

If we were following a chronological itinerary, then this would be at the very beginning of the tour. Inside the wonderful Basilica di Santo Spirito we can admire one of the earliest Michelangelos. It is a wood Christ that still moves us for his unusual adolescent like body. The young Michelangelo spent some time in Santo Spirito soon after the death of his patron Lorenzo the Magnificent, in 1492.

While at Santo Spirito, Michelangelo was granted permission by the Prior to dissect the corpses of the nearby hospital. To show his appreciation for this unusual and risky permission, he carved a touching wood Crucifix in 1493.

Christ looks like a frail teenager, most certainly inspired by the many corpses he studied at the morgue. It represents a sad and introspective allegory of the human weakness facing death.

After all these works of art and facts one can ask “Where is Michelangelo buried? Is he in Rome, is he in Florence?”. To answer to this question we should go back to the same neighborhood where we started: the district of Santa Croce.

Michelangelo died in Rome in 1564 but he was tombed in Florence inside Santa Croce Church after his nephew brought his dead body back to Florence. His faithful friend Giorgio Vasari designed his sumptuous grave where he imagined three graceful and sad female figures symbolizing the Painting, the Sculpture and the Architecture mourning for the dead master.